According to the American Kennel Club the Top Ten List of Dogs for 2013 are:

While the Labrador Retriever has been in the number one slot for several years the Rottweiler has made a significant rise up the “Most Wanted” list because back in 2003 and 2008 they were only ranked in 15th and 14th place, respectively.  My favorite, Great Danes ranked#16…not too bad.   If you want to see where your dog ranks you can check out the AKC’s list which is based on dog registrations.

This is Cece the Chocolate Lab – Just look at that face….no wonder Labs are the #1 dog. 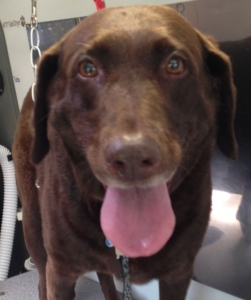